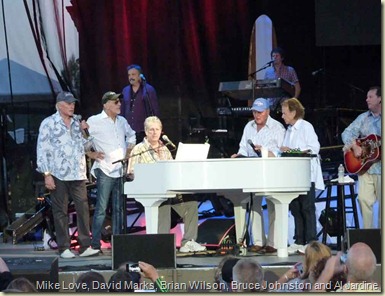 My husband (much to my surprised) (not really) managed to snag tickets to the Beach Boys concert at the Chateau Ste Michelle Winery in Woodinville, WA.

The concert took place on Friday the 13th of July and it was absolutely awesome. Here we are with a bunch of folks around our age; singing, dancing, bouncing a beach ball around, clapping, yelling and just having one heck of a good time! 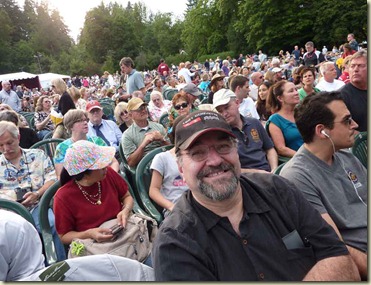 As much fun as that was, I have to admit the highlight of the whole trip was to be able to have a visit with my beautiful daughter, “Barbara Ann” (it’s true) and her family. 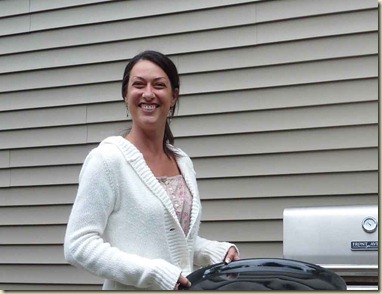 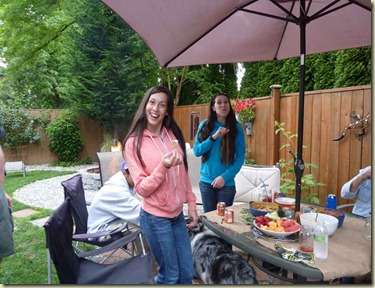 My two granddaughters Kendra and Kayla. 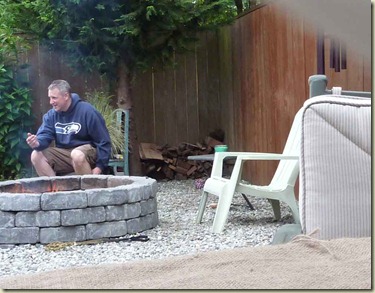 We had an excellent weekend and the weather in Seattle was sunny and warm!

Unfortunately upon our return home we had a tough week, but now it’s time to celebrate the happy memories and get back to work on the bears!

Thanks for the visit. Hugs, Vicki

Posted by customteddys at 7:57 PM 6 comments: 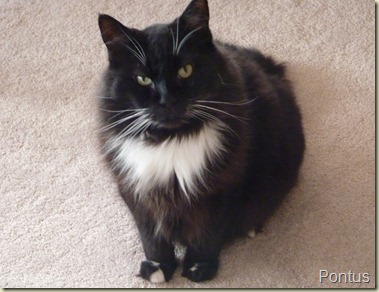 In 2001 we adopted a kitty named Pontus from the Gastineau Humane Society here in Juneau. His real name nobody knows. He was brought into the Humane Society and deposited in a cage, as his former owners decided they no longer wanted him. 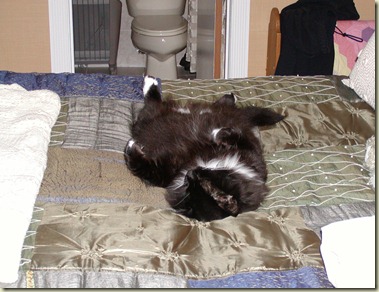 Shortly after his arrival at our home he developed symptoms of his illness. After many trips to the vet, it was determined that Pontus had a tendency to develop bladder stones and had stored up quite a few in his bladder, a very dangerous situation. 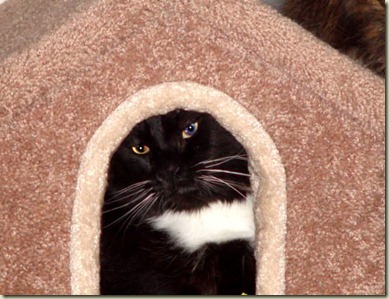 Our vet recommended surgery to clean out his bladder and also that he be placed on a special diet to, hopefully, prevent him from developing more stones in the future.

After the surgery Pontus got well and over time fully and completely adopted us into his life. You see, when he first arrived at our home, he really didn’t want much to do with anybody. He would go into the bedroom and sleep by himself and when it was time for the humans to go to bed, he would exit the room. No laps for this cat. No pets either. He just wasn’t interested. Probably because he had never had laps or pets in his previous life. Oh, he had some experience with a broom, which was evident each time he ran and hid when the broom came out. 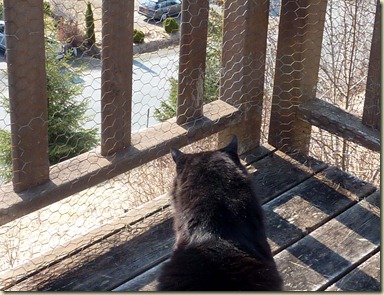 Over time he began to trust his human companions. He became a lap cat. In fact my husband could hardly sit down in his chair without Pontus jumping up to hang out. He loved his pets, and would sit in the kitchen meowing  until somebody bent down to scratch him on the chin. He even began to tolerate the broom, although he watched it the whole time it was out. 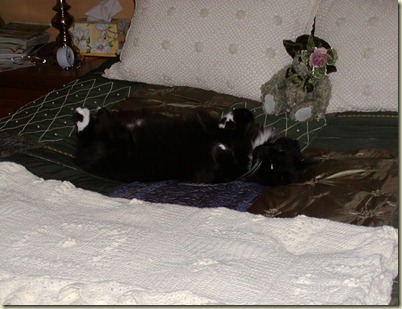 Last week he started to have problems again and I was scared and in tears. I knew something was seriously wrong when he went to the cat box numerous times without leaving anything behind. He laid on the floor and was obviously in a lot of pain. It turns out that the stones had reappeared and were bigger than before. They had blocked his urinary passage and it would have taken more to fix him than he could have possibly tolerated at his age. 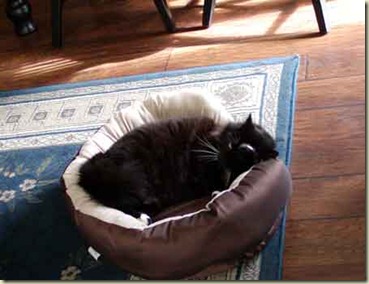 So, sadly we had to say good bye. 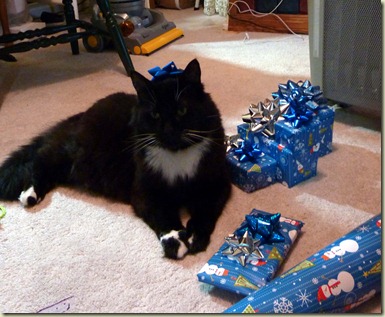 Posted by customteddys at 8:04 PM 8 comments:

Katrina or the Bear? 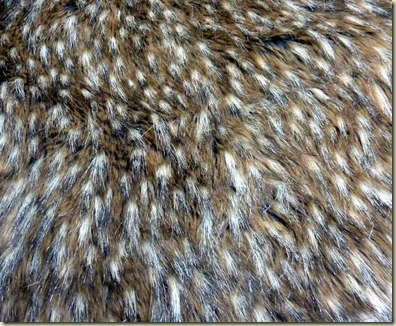 Quite some time ago I purchased some gorgeous spotted wolf faux fur and I have made, well, I guess three beautiful bears from the fur.

Every time I make one of these guys, I mistake it for my cat.

Well, it goes like this…. I’ll be in the process of creating the bear, and will leave it sitting in various places around the house.

Walking through a room and catching a glimpse of the bear through the corner of my eye I wonder to myself, “why is the cat sitting on the end of the coffee table” … 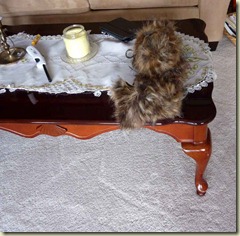 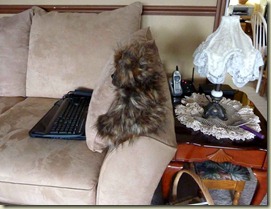 or (god forbid) “why is the cat sitting on the kitchen table.” 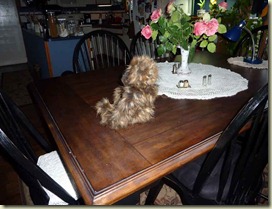 My most recent creation, MacArthur was no exception to this rule. So, I just thought I’d take a couple of pictures so you can see the why of it all. 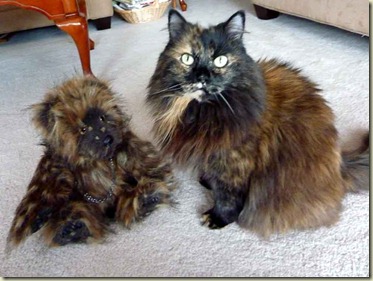 The bear was a lot more cooperative than the cat, but I did manage a couple of good shots. 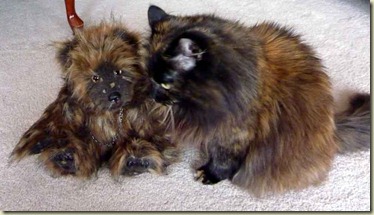 So, in introducing you to my new bear, MacArthur, you also get to meet my little girl kitty, Katrina. 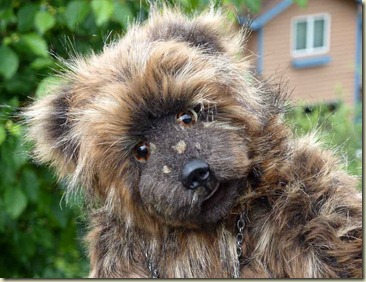 Posted by customteddys at 7:30 PM 5 comments: 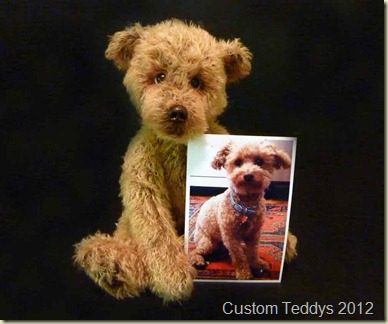 I have just completed the most delightful “assignment.”

Skipper is one of the sweetest little poodle pups I have ever met, at least by photo. His Mom has written a book called “Deanie and Skips Flying Bike Trip.” 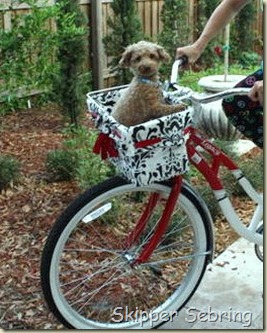 Since many people think that little Skipper looks like a teddy bear, Deanie thought it was a great idea to have a teddy bear made to order in the likeness of her little dog. And I was thrilled to be chosen to create the look-alike! 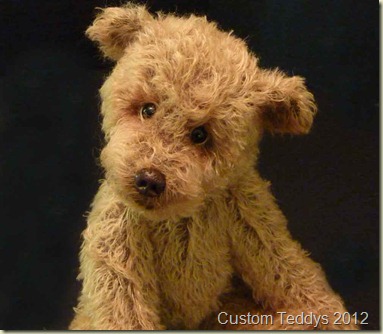 Deanie will be self-publishing her book in the near future and I will provide links when available. For now little Skipper does have a Facebook page and Twitter account for anyone who is interested in following his adventures. 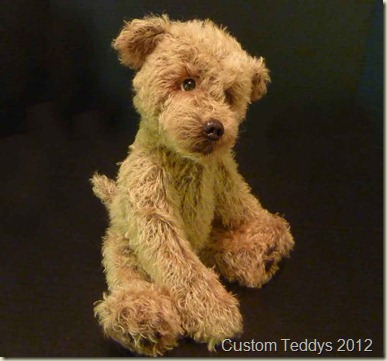 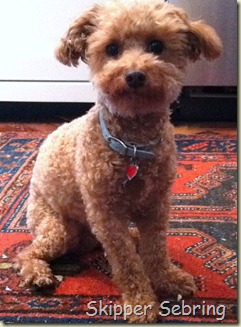 Is he not just the cutest little guy. I wish his Mom best of luck with her book and I’ll pass along any information I receive on how to get your own copy.

Thanks for coming by my blog!

Vicki and the Bears (pups)!

Posted by customteddys at 3:37 PM 9 comments: 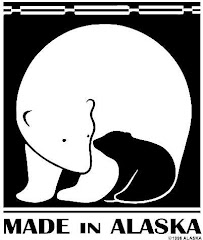 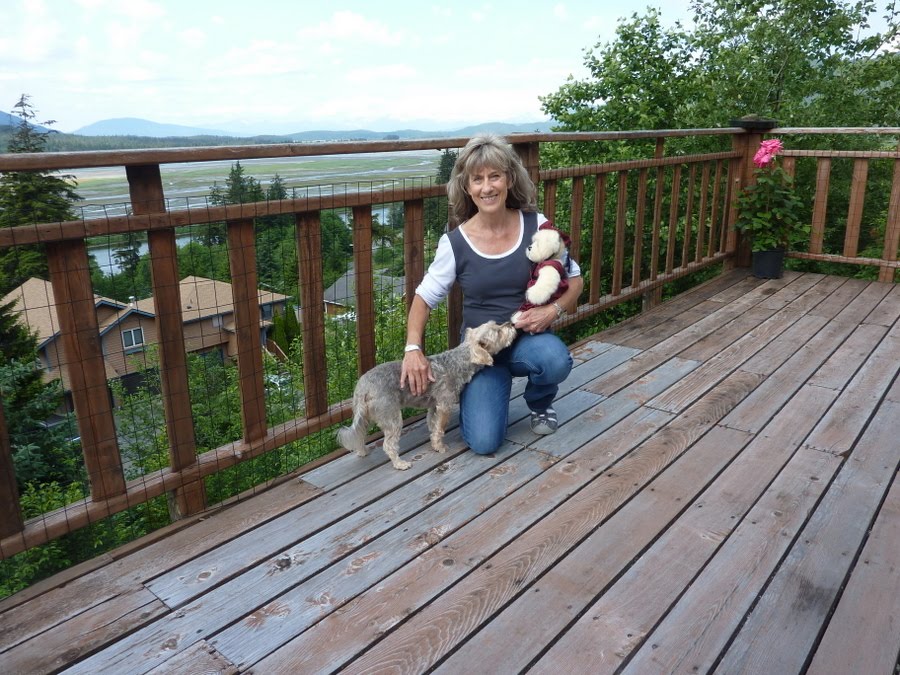